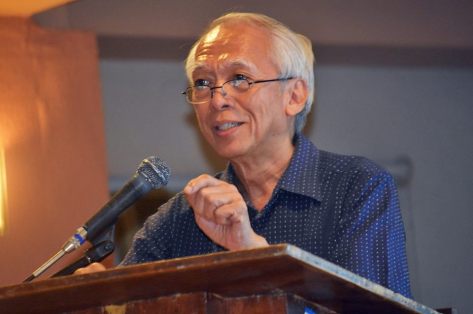 Arkibong Bayan:  A few hours before they were arrested on their way home, peace consultant Rey Claro Casambre and wife Patricia Cora Casambre had attended the program at UP celebrating the life of S&T friend, Rolando Peña, chair of the Geology Board of Examiners.

Both studied at the University of the Philippines as scholars of the National Science Development Board (now DOST) — Patricia, Mathematics, 1966; and, Rey, Physics, 1971, respectively. Patricia taught Mathematics first at UP Tarlac and later at UP Baguio; Rey, taught Physics at UP Baguio after a short stint at the facilities of the Philippine Atomic Energy Commission in Diliman. Both participated in the first National Conference on the State of Science and Technology in the Philippines in UP Baguio in 1969.

When arrested on the evening of December 6, both have been working at the Philippine Peace Center (https://philpeacecenter.wordpress.com/). Rey is the Executive Director while Cora works as translator and researcher. They are long-time peace advocates who have closely monitored the peace process between the GRP and NDFP. Rey has been a frequent speaker in many fora organized by groups pushing for the peace talks. He has also granted media interviews on the same issue.

Karapatan Urgent Alert:  Peace consultant and Philippine Peace Center Executive Director Rey Casambre, 67, and wife Patricia Cora Casambre, 72, were arrested last night. The two were brought to the PNP CIDG-NCR Office in Camp Crame, Quezon City. Their lawyers have not been given information on the charges against the couple. #StopTheAttacks

PILC:  The illegal arrest of the fourth peace consultant in 2018, Rey Casambre, together with his wife Cora, by peace spoilers betrays the government’s insincerity in the peace negotiations.

We now fear for the safety of others involved in the peace talks. Among them, clients Alexander and Winona Birondo who were part of the NDFP delegation and whose cases were recently dismissed by a Quezon City trial court. The Birondo spouses have reported intense surveillance and harassment.

By rounding up all peace consultants, harassing those involved in the peace negotiations, demonising them unnecessarily, the PNP exploits their badges as law enforcers, and aids and abets the scuttling of the peace talks. It has become nothing more than an instrument of repression.